I have always had an immense passion for literature, so when I joined Sigma Tau Delta and was promptly invited to the Dinner & Conversations event entitled “Murder at the Old Bailey: An Evening of Sherlockian Detection,” I nearly trembled with excitement. Of course, as a bonus, I was notified that all attendees (student and staff) were encouraged to dress as particular artists from the 1920’s while participating in this event.  At this point, I was practically squealing with delight. In my eyes, attending a murder mystery dinner with other English majors while simultaneously imitating one of my favorite authors was better than any night out. 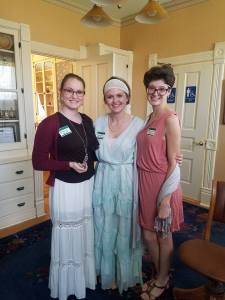 From the moment I stepped foot in the Old Baily House, I was entranced. I came dressed as Virginia Woolf (complete with a long skirt and a bun), and I giggled as I observed the character prop table set up in the entryway of the building. This table held various props for each artistic figure that would be “attending” the dinner, and it contributed to the aesthetic of the evening. For example, the table included a peach for T.S Elliot, a magnifying glass for Agatha Christine, and a pink feather boa for Mae West. I scooped up the rocks left for Virginia Woolf and winced as I remembered my clothing did not have pockets. What a shame! Student and staff enjoyed carrying their props throughout the night and also appreciated the character biographies left with them. The short biographies we received were extremely useful later.

Once everyone was present and had the opportunity to consume some of the delicious food prepared for the event, Dr. Helwig described Sherlock’s methods of inductive and deductive reasoning, and also “set the scene” for the evening. According to her story, H.G. Wells created a time machine and used his machine to bring various artists and historical figures from the 1920’s to the Old Bailey house in the year 2017. Unfortunately, this angered many of the figures, and coincidentally, H.G. wells was promptly, mysteriously, and ridiculously murdered shortly after this event.

Dr. Helwig explained that she would be playing the police and the rest of us, the artists and historical figures, would be playing the suspects. We were then encouraged to talk to different characters about their biography and look for clues in order to solve the murder of H.G Wells. Thus, we began socializing with other characters, writing down clues, and laughing as we did our best to imitate our historical figures.

At the end of the discussion period, everyone analyzed their notes and guessed the name of the murderer. I am delighted to say that many attendees guessed correctly! It appeared that the analysis and prediction skills we obtained through our English degrees paid off that night. I am sure that Sherlock Holmes would be proud!

I thoroughly enjoyed my first Sigma Tau Delta Dinner & Conversations event. It was wonderful to see new faces, meet new people, and discuss some of the most influential figures in history. I immensely appreciated the time and effort spent organizing and planning the event, and I believe everyone who attended was equally charmed and enchanted by the evening. I look forward to my future as a member of Sigma Tau Delta and the opportunity to participate in more Dinner & Conversation events in the future!