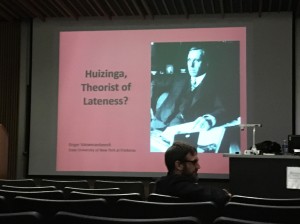 Late winter, 11:30 am, Tuesday, March 7th一the calm, sunny morning after tornado sirens and harsh, relenting winds beat the Macomb streets a shade of twigs and leaf buds—my fellow graduate student Kelly Schloss and I were entrusted the honor of picking up the keynote speaker for the night’s 10th Annual Magliocco Lecture, Dr. Birger Vanwesenbeeck, from the Quality Inn in town and delivering him to the Mediterranean Grill on the square where we were to have lunch with Dr. David Banash and a number of graduate students. I did not know what to expect from this accomplished scholar, but I was confident the experience would leave me even more electrified than the previous night’s storms.

Dr. Vanwesenbeeck, sitting patiently in the hotel lounge, book in hand, struck me at once as the humble and ponderous type of intellectual who wanders a library’s cobwebbed corridors lending a read to history’s long-abandoned tomes. He introduced himself as Birger (pronounced “Beer-ghur”), extending a hand to each of us as he closed his book and gathered his materials for the drive into town. Like many dedicated professors, Dr. Vanwesenbeeck was immediately curious of our work as graduate students at Western, especially regarding the course of our thesis work while enrolled in the program. Our shared curiosities would extend throughout lunch, where, over hummus, falafel, and baba ghanouje, we discussed literature and learned more about the histories that have shaped each of our experiences with language.

7:00 that evening—WIU students and faculty gathered in anticipation for the Magliocco lecture, a series established in 2006 by Dr. Maurine Magliocco in support of the discussion of literature, film, theory, or the state of the English discipline with, according to Magliocco, the specific purpose of helping faculty to strengthen connections in their professional work. This year, the WIU community was provided the unique opportunity of hearing Dr. Birger Vanwesenbeeck speak on his recent scholarship concerning the critical approach to Late Style with a specific focus on the Dutch historian Johan Huizinga.

Dr. Banash began the evening by thanking Dr. Magliocco, in attendance, for her inspirational commitment to literature, the arts, and the academic culture of Western. He then introduced Dr. Vanwesenbeeck—an Associate Professor of English at State University of New York at Fredonia—highlighting key points in his career from his current specialty in Twentieth-Century American Literature and Culture, World Literature, and Critical Theory as well as his interest in postmodern novels by William Gaddis and Thomas Pynchon. Among his notable achievements include his current standing as Editor for the “Fictions Present” thread of the Electronic Book Review; Co-editor of William Gaddis, The Last of Something; and author of Stefan Zweig and World Literature.

Dr. Vanwesenbeeck took the stage and began his discussion of what is often considered to be the first postmodern novel, The Recognitions by William Gaddis, which Vanwesenbeeck had researched as a graduate student and was a precursor for his future pursuits in literary criticism. He then lead the audience through a powerpoint presentation of the night’s focus, beginning with Huizinga’s foundational text Herfsttij der Middeleeuwen (The Autumn of the Middle Ages) that would act as a focal point for his exploration of art and literature that marks a blurred line between the start and end of literary periods. Returning to Gaddis, Vanwesenbeeck illuminated for the audience a new impressionable reading of the author as not only the creator of what would come to be known as “the first postmodern novel” but a writer attempting to pen “the last Christian novel.” It was this simultaneous perception of ending and beginning that inspired Vanwesenbeeck to question what is last and what is first when it comes to the movements that define literary interpretation.

Vanwesenbeeck noted with excited hand movements and a precision of language that as Gaddis bridged Christian Late-Modernity with the Postmodern, Huizinga observed a similar trend in artists and writers transitioning between the periods of the Enlightenment and Romanticism. Huizinga’s observations, Vanwesenbeeck argued, were a catalyst toward an obsession with“endings, lateness, and lastness in academia,” especially in regard to the canonical works that seemed to be prioritized on the basis of how they fit into certain eras.

“The late work itself obscures the subject’s objectivity,” Vanwesenbeeck stated before delving into a discussion of the stylistic aspects that defined epics and other genres definitive to certain movements. After acknowledging the criticisms of approaching texts through late style, Vanwesenbeeck stated that “late style is a critical construct that serves ideological ends rather than stakes a claim in reality,” suggesting that the method of categorizing texts as “early” or “late” runs the risk of bowing down to the cultural goals of societies at various points in history.

Through verbal moments of intense intellectual prodding and visuals of quotes, paintings, and book covers from an array of authors and critics, Vanwesenbeeck painted a refined excerpt of a field that would otherwise bury a person in years of unperturbed reading. Notable was his allusion to artists and authors from many periods and their association with a model of lateness as either “a coronation of crowning” or “exhaustion and decay.” Where Huizinga writes of texts of the Late Middle Ages as “a tree with overripe fruit,” other periods of lateness are presented as decay, as though tied with an aging artist’s fear of death. Vanwesenbeeck then went on to provide various contexts for these approaches to lateness as it relates to christian iconography, ekphrastic texts, perceptions of time, and a writer’s identity at various stages of their life before ending where he began, highlighting the postmodern influences that sprouted his scholarly career.

“Postmodernists asked about origins,” Vanwesenbeeck paused and looked around the room of enlightened faces. “Now we’re asking about endings.”

← A Magical Experience: Harry Potter Study Abroad
The Art of the Handwritten Letter →