Screening “Inside Buffalo”: A Commentary on the Ironic and Contradictory 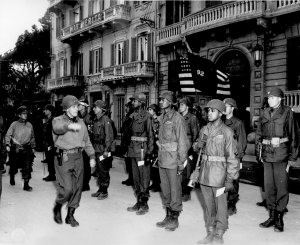 There were about 50 other people sitting in the red chairs of the theater. The majority were spaced out, with only a few clumps of whispering students, heads bowed before cell phones; the siren song of extra credit points having lured them into the Sandburg Theater. I, of course, attended because of my interest in the subject matter—although admittedly the extra credit points offered for two of my courses helped sweeten the deal.

Director Fred Kudjo Kuwornu was present at this screening of his documentary, “Inside Buffalo”. When I initially heard of the film screening, I was interested in learning more about the gastrointestinal workings of such magnificent creatures, but I was misinformed in a similar manner to my assumption that “The Secret Life of Bees” was a nature documentary, which led to me staring, mouth agape, in front of a promotional poster decorated with not the strong and studious workers of our ecosystem but instead the smiling faces of utterly boring humans.

What “Inside Buffalo” actually explores are the actions of the African American men that served in the 92nd Infantry Division during World War II, otherwise known as Buffalo Soldiers. Disappointment with the lack of buffaloes aside, I was drawn to this particular film because most representations of World War II document the heroic actions of “real” American heroes and tiptoe very carefully around the ugly truth of the blatantly racist ideology of the time. While posters were printed of the heroic American man, square jawed and broad shouldered, standing in the face of the hate-filled and discriminatory Nazi regime or the ruthless, alien Japanese, the African American was depicted as corruptive, disgusting, stupid, and animalistic (or at least until the United States started a targeting campaign to recruit African Americans to join the war effort, as discussed in “Inside Buffalo,” although this depiction of course promptly resumed when their usefulness expired).

The film itself opens with shots of racial violence and hatred, wasting no time in tackling the subject matter head on. The documentary contained no lingering shots and instead flashed the necessary image on the screen and then abruptly cut to the next. This ceaseless, frantic pace is telling of the scope of the film itself. Director Fred Kudko Kuwornu, in a Q&A session after the film, told the audience how when starting the production of the film, he realized that he could not talk about the actions of the 92nd Infantry Division without also addressing the issue of race relations of the time. This necessitated contextualization is a massive undertaking, and so the documentary attempts to do this by taking the arm of the viewer and dragging them along while sprinting at a breakneck pace past years of history and complex social forces. While it is disappointing that a lot of important information was completely neglected, the emotional response elicited by such powerful images was palpable.

The telling of the experiences of the men who served in the 92nd Infantry Division highlighted many ironies of the time. This was achieved through talking head segments, stock footage, and reenactments. The interviewed veterans of the 92nd Infantry Division divulged how they were treated fairly by the Italians they encountered in their tour of duty, but as soon as they returned home after the war, they were still subjected to the discriminatory nature of American society. This brings up the fallacious lunacy of the entire situation: black men that were discriminated against died in droves to protect white people that were being discriminated against to return home to continue to be discriminated against by those now freed from the oppressive and deadly yoke of discrimination.

Perhaps my appreciation for this film is rooted squarely upon the fact that this film commemorates the sickening hypocrisy, the twisted irony, and the appalling contradiction that permeates the whole of our existence; it grows like mold in every crack and crevice, in every thought and word. We have fought and continue to fight to protect the United States of America—the beacon of liberty and safe refuge for the persecuted. How convenient that our public consciousness sees beneath our feet free soil and not the blood drenched reward of genocide.

However, I found myself in great admiration of the actions of the 92nd Infantry Division. Despite their awareness regarding the injustice of their situation, they still did what they felt they had to do. These veterans fought to protect the democracy and freedom that they were yet unable to attain. Perhaps they are the model for which we should continue to operate in despite our desperate and futile lives—the fight for an ideal in the face of the fact that it may be impossible to attain, paradoxical to desire, or naive to believe.