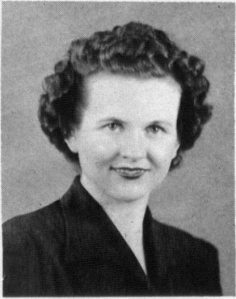 Last year, Martha Simons, a 93-year-old Western Illinois University alum, received a copy of the first edition of The Mirror and The Lamp.  She thoroughly enjoyed reading the articles, getting a glimpse at the present English department, and she was very eager to share her own stories and achievements.

Martha Simons graduated  from Western when it was still a teachers’ college in 1944. Her years in the classroom were influenced by the events of World War II. After graduating, Martha taught English and Latin for thirty years before retiring in 1982.

Martha Simons sent us four remarkable essays about her experiences growing up, attending school, and life after retirement. Below is an essay written by Martha entitled “First Year Teacher”:

I was a World War II college student, graduating with a Bachelor of Education with majors in English and Latin from Western Illinois State Teachers College at Macomb, Illinois in June of 1944. Because most able-bodied men were engaged in some aspect of the war, teaching jobs were fairly plentiful since almost every small town had its own high school. Superintendents came to campus and conducted interviews to fill teaching positions. The average salary being offered for an annual contract of 9 months employment was $1700.00. I felt fortunate in signing a contract for $1800.00! This supposedly meant I received a monthly check for $200.00. However, since it was war time, our government had enacted a Victory Tax of twenty percent and the State of Illinois withheld five percent for retirement. My net pay per month was $150.00 for nine months – no pay for June, July and August. I went home to the farm for that interval.

Financially everything was doable. Unlike today’s graduate, I had no tuition loans to pay off. I had a scholarship and I had worked. During freshman and sophomore years, I had lived in the home of a professor and had done cooking and cleaning for my room and board. Many professors had such arrangements often for the care of small children. During my junior and senior years I worked in the college library under one of FDR’s alphabetical programs which paid 35¢ an hour. Even without such programs, costs were minimal compared to today’s standards. As I recall, tuition was $35.00 a quarter, thirty dollars would be forgiven if we signed a pledge to teach in the state of Illinois for three years. Even the remaining $5.00 was difficult to come by. However, it did cover student health services and admission to all college activities. Remember this was the end of the Great Depression years and some men labored for one dollar a day. Wartime prosperity had not yet hit western Illinois.

My first contract was with the district in St. Elmo, Illinois in Fayette County. This town of around 3,000 population was located in the south central part of the state, 75 miles east of St. Louis on old highway 40, between Vandalia and Effingham. It was an interesting community located in agricultural surroundings with poorer soil and thus less productive than the counties I was familiar with in western Illinois. However, during the years I was there, a very productive oil and gas field was active and there was a refinery plant in town. The town was filled with all the malodorous scents associated with the gas and oil business.

The student body of around 300 was a hybrid of students whose families had literally traveled all over the world as they had association with the petroleum industry and those students who hadn’t traveled far from their less than prosperous farms. Even among the farm students there was much divergence among those who had producing oil wells on their land and those who didn’t. The night skies around St. Elmo were always lighted with the many gas plumes that were constantly burned off.

My duties consisted of teaching ninth grade English – the class of 90 was divided into two sections of 45 each. In retrospect, this seems rather daunting except for the fact that in the era, teachers were still respected and were well supported by parents. I don’t recall any major discipline problems. I also taught 2 sections of sophomore English, was the school librarian and supervised 2 study halls. There was another English teacher for junior and senior classes and the history teacher also taught the Latin classes. There was not a department chairman or a curriculum committee. I was simply issued the literature text, and the grammar/composition text and I pretty much functioned on my own. All teachers were expected to help with school functions, attending student activities, taking a turn at selling tickets at plays and games, living a life above reproach, and serving a good example. Most social life consisted of school and church activities – and for an English teacher, grading of compositions took up a lot of time. My fiancé was in England attached to a field hospital, so I wrote to him almost every day – his letters to me usually came in bundles not in the order in which they were written, but much appreciated nevertheless. Occasional trips by Greyhound bus into St. Louis for shopping or entertainment provided diversion. I recall attending a performance of Gilbert and Sullivan’s Mikado by a touring company of the D’Oyly Carte Opera Company. There was a movie theater in town which also provided entertainment.

My living arrangements consisted of an upstairs bedroom rental in a private home. Another teacher lived in the other bedroom across the hall and we shared a bath. We did our laundry in the bathroom wash basin and had a rack for drying in a large hall.

Our accommodations were adequate, but not luxurious. We ate our meals in the local restaurants which would also pack a lunch for us to carry. Our rooming facility was ten or twelve blocks from the high school. None of us had cars; it was still wartime, so we walked the distance in all sorts of weather. One problem we faced was the cost of hosiery, which we could purchase because of wartime shortages. They were made of a fiber called lisle (a long staple cotton fiber.) The drawback of these stockings was that they tended to sag at the knee and to water spot. On rainy days we always carried an extra pair to change into after walking to school. Most of my wardrobe consisted of clothing I had worn in college because there was a shortage of fabric.

I recall one classroom incident which was unsettling. We relied on the blackboard because none of the technical support aids used presently in the classroom were available to us. I was writing on the board with my back  to the class when I sensed unrest and giggling then erupting into laughter – I wondered if I had sat in something or if my slip was descending down around my ankles when the scent of skunk began to fill my nostrils. A young man seated in the back of the room had run his trap lines that morning and had had to remove a skunk. Warmth of the classroom had increased the scent and he was too bashful to admit he was at fault. His parents were called to transport him back home.

In October of that year, my brother was a captain in the Army Air Force assigned to fly the Hump from India to China, and earned a well deserved furlough home.  Schools were very lenient in allowing time off for me to travel to my family home. I was an inexperienced traveler, but I caught the bus into St. Louis and took a train to Burlington, Iowa where my family met me. Travel space during wartime was limited; the purchase of a ticket did not guarantee a seat. I boarded the crowded train and stood until dining service was concluded and I was able to be seated in the dining car. October of 1944 was the year both teams of the World Series were from St. Louis. The dining car was filled with sports fans travelling from the World Series and some of them had been imbibing pretty liberally. I was naïve and aghast at the behavior. Some men across the aisle from me were drinking beer with raw egg. When the conductor passed through the car, he inadvertently left his pocket punch lying on the table. One of the men picked it up and started punching holes in his beautiful silk neck tie. He seemed amused at the time and it left me wondering what he thought the next morning when he saw the large six-sided stars punched in his expensive tie.

In April of that year we celebrated Victory in Europe. My fiancé traveled home for a thirty-day furlough. We were married on July 22, and in August Japan surrendered after the atom bomb was dropped. Though the war was over, my husband was still in the army and I returned to St. Elmo to teach a second year. By that time I regarded myself as an experienced teacher.

Martha Simons currently resides in Colorado Springs, living in a large retirement community in the assisted living facility. From all of us at The Mirror and the Lamp, we would like to thank Martha for sharing her story with us. We hope she enjoys this next edition of our newsletter as much as the first.

Martha Simons participates in an activity in her assisted living facility

← How it Began: The Foundations of Western Literary Society
Transitions and Decisions →