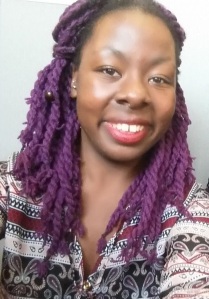 Tuesdai Perry is currently a senior at Western Illinois University. From her purple hair, to her infectious laugh and enthusiastic smile, there is not a single aspect of Tuesdai’s personality that does not radiate effervescence. She is an unstoppable force in the theater department here at WIU having personally performed in over ten plays on campus. She has also contributed to countless other university productions in other supporting capacities such as directing, set design, or stage managing. She is currently working on finishing up her Bachelor’s Degree with a major in Theatre Directing and a minor in Creative Writing and is set to graduate in Spring 2015. Tuesdai told me that she selected WIU based on the school’s musical theater program, the close proximity to her hometown of Gary, Indiana, and, perhaps most importantly, because the alma mater’s colors included her favorite color: purple.

At the beginning of her career at WIU, Tuesdai’s major was originally Musical Theatre, but she made transition into directing when she swapped majors for Theatre Directing two years ago. She had this to say when prompted about why she felt that the change was necessary, “When I’m looking for something, I’m looking for something specific. I wanted to be able to tell a story and bring out what I like while also helping actors grow, because it’s really about them. I want to help actors not only reach their potential, but understand the story and why they’re doing it.”

Working in the theater with plays and musicals can be incredibly time consuming, but Tuesdai’s grace is not shaken. She said about the time consuming process, “We rehearse 6 days a week, 4 hours a night. 24 hours of rehearsing. A complete day. Sometimes we’ll rehearse certain scenes and you won’t get called in until a certain time of night.” While the extracurricular workload may sound like too much to handle, Tuesdai assured me, “You know you’re busy, but it doesn’t feel like work.”

Despite the consumption of her free-time outside of the classroom, Tuesdai is relentless when it comes to her passion. However, she was not always so keen to get up on stage to perform. The story of how she started her long tenured career in theater was quite different than I expected. Tuesdai said about her beginnings as a young actress, “Getting into theatre is actually really funny. My 6th grade year you get trophies at awards day. I knew if you did the Saturday School Little People’s Theater program you get a trophy. I was like fine, it’s another trophy…but then I ended up with nine. That’s how I first got into theater [for the trophies], but then I realized I liked it.”

Tuesdai’s minor in Creative Writing, with an emphasis on fiction, has also contributed heavily to her work in the theater. She is constantly writing and refining her craft through her work with short stories and poetry. Tuesdai said about her time studying creative writing, “It did compliment my major [Theatre Directing]. I learned as early as my first creative writing classes with John Schultz, when you’re telling a story only leave in the vital parts.” Tuesdai maintained that whenever she writes a line of poetry or prose, she is constantly asking herself how it adds to the purpose of the story that is trying to be told. That process supplements her work as a director in the theater quite well. “That really helps me with my directing when I’m working with blocking or choreographing it’s like how can I tell this story, how do the dominos line up, is this needed or is it not.” In other words, it’s all about including what is absolutely necessary to the story she is working on in order to have the best possible narrative or poem during her writing process.

The culmination of her work in theater and creative writing will be on full display when Tuesdai presents “The Colored Museum,” a show that she is directing for her Honor’s thesis before graduation in May. It goes up the last weekend of April in Simpkins Theater, located in Simpkins hall. Tuesdai said about her final directing effort at Western Illinois University, “It’s presented kind of like a museum, but it’s different. There are eleven exhibits that look at the African-American experience in America from slavery up until now. But it doesn’t only focus on African-Americans, basically it sends the message like ‘how do you go on when you have so much baggage?’ and that is what makes the message universal.”

Tuesdai’s plans post-graduation are ambitious as ever. When I asked her what the future holds for her with her theater and creative writing background, she joked, “It’s hard to say. I don’t even know what I’m going to do next weekend.” She told me that she has ambitions of getting some real-world experience while she continues to perfect her craft as an actress, director, and writer. This summer, she plans to commute from her hometown in Gary, Indiana, to Northbrook, Illinois. “I’ll be a performing arts instructor for children grades K-2 for their Kids On Broadway program.” After that, she told me, the future is wide open.

More than anything, Tuesdai Perry plans on being happy no matter where life ends up taking her. She said that the most important thing is ensuring confidence and stability in the work that she loves. “I just want to find security within what I want to do. It’s not that I’m striving for happiness, but it’s weird because what I do brings me so much happiness.”

← Chris Ivy: Master of Transitions
Turning a Passion into a Career: Kristyne Bradford →