No Place for the Liberal Arts

It is 12:07 AM. I have been (re)writing this article for seven hours. Nothing on this page has remained the same except for the title, “No Place for the Liberal Arts.” I have made grand rhetorical gestures, appealed to the predisposed sympathies of anticipated readers, and ridiculed logical fallacies. I have slashed paragraphs, obliterated pages, and gunned down bloated, loping run-on sentences with periods, commas, semicolons, and dashes. A common one-liner edgy writers like to use is: “editing is like killing your children.” In this sense, I have committed an impressive amount of filicide to bring you these lines.

My involvement with this piece began simply enough. The Managing Editor of The Mirror and the Lamp, Rebecca Gonner, asked me to write about the recent Board of Trustee’s meeting where faculty layoffs were approved by a vote of 5-1-1. I agreed readily enough; I already knew the title of the piece because I already knew the content of its soul. However, I quickly ran into the problem of its form.

I have spent hours researching and name dropping people far smarter than me. I’ve tried arguing for the benefits of synthesizing business acumen with the sense of perspective provided by the liberal arts. I’ve tried pointing to the necessity of acknowledging the epistemology inevitably informing any claim to absolutely objective scientific empiricism and rationalism. I’ve tried highlighting major societal issues that are a question of rhetoric rather than corporate skillsets. And yet in every effort I felt like I had missed the point. I quickly realized that my argument cannot compete under the cold light of scientific taxonomies. Nor can I out-objectify the business world, in which people are assets that must always result in profit.

What is clear is this: it is a disconcerting time to be an English major. To even the most sheltered liberal arts student, it is increasingly apparent that society’s interest in their education is quickly evaporating. The faculty layoffs, which are concentrated in the humanities, shouldn’t be the only sign; Jeb Bush’s comments on how liberal arts majors have to realize they’re going to end up working at a Chick-fil-A reflect an overall disconnect between the goals of a higher education and the values of its critics. These criticisms of the liberal arts are not held only by distant politicians but by administrators and students here at Western. People at WIU ridicule departments like Women’s Studies with such ease and conviction. What is unacknowledged is that viewing Women’s Studies and similar subjects as an irrelevant frivolity is a disturbing marker for a push towards homogenized discourse which is decidedly male and white.

You may find this article unsatisfying. I tend to agree. I wish that, in a stroke of brilliance, I had scribbled down an equation on a floppy napkin that undisputedly proved the value of the liberal arts so that I, in messianic triumph, could save us all. But I didn’t. I am not the only one who has failed on this account—we already see English departments adjusting their curriculum to pedagogy primarily concerned with skillset acquisition. It seems like English’s sole defense for existing will soon be its utility in subtending the work of corporate genre writing.

I think I will leave further prophesying to wiser people. Instead, what I have to offer is this, which is nothing much 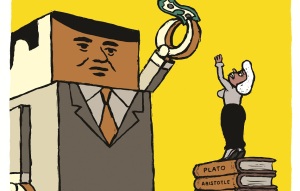 at all: my every day revolves around money. This is what we all learn to do, what we have to do. My education has done well to teach me that. In turn, I’ve learned to balance my resume with work, academics, and volunteering. I’ve learned how to turn writing essays into proof of effective interpersonal communication. I’ve learned that there is no place for aspiration without money. But, sometimes, in the few moments after turning the final page of a book or in the silence between the last lilting word of a poem and the first peal of applause, I think that, maybe, I’ve learned something else.

← ‘I Prefer Not To’: The Myth of Comfortable Protest
EGO Conference →