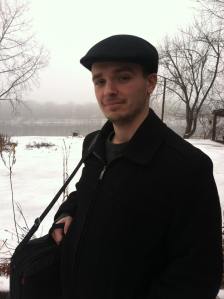 The Proust Questionnaire is a popular form of interview, developed by French writer, Marcel Proust, that is focused on the interviewees personality. It is popularly used by Vanity Fair. A reoccurring segment on The Mirror and the Lamp, our questionnaire will focus on getting to know the WIU English Department’s students and faculty members.

Sheldon Gaskell is a first-year English Master’s student at WIU. He is a graduate of Cornell College and hails from Enfield, CT.

Who are your favorite writers?

So many authors and poets, but I will narrow it down to meals.  For an appetizer, quick literary satisfaction, I love to delve into poetry: Frost, Billy Collins, Adrienne Rich, Borges, Federico Garcia Lorca, Maya Angelou, Andrea Gibson, Kevin Coval, Danez Smith… My go-to steak and potatoes novelist is inarguably John Steinbeck.  I love his passionate narrative voice, complex characters, imagery, and focus on nature.  East of Eden is my favorite of his novels, but I also love The Grapes of Wrath and Of Mice and Men of course.  I’m also a big fan of Ken Kesey, Aldous Huxley, Virginia Woolf, Sherman Alexie, Tolkien, Mary Shelley, and Hemmingway.  My favorite contemporary novelist is Donna Tartt for her novel The Goldfinch, and for dessert, my guilty pleasures, I have to admit once I start reading Silverwing by Kenneth Oppel or anything by Suzanne Collins (especially her Gregor the Overlander series), I can’t stop.  Recently, I’ve been inspired by Paul Harding and “post-modern” writers like Steve Tomasula and Mark Z. Danielewski.

Who is your favorite hero/heroine of fiction?

Tom Joad from The Grapes of Wrath, hands down.  But, I also love Randle P. McMurphy and Chief Bromden from One Flew Over the Cuckoo’s Nest.

Who are your heroes in real life?

My mom, dad, grandmother (Erline), late grandfather (Richie), and late great uncle Buddy (both Richie and Buddy served in the Korean War).  I admire their struggles and selflessness, and I am inspired by their stories daily.  I am especially in awe at my grandmother who fought the glass ceiling throughout her professional career and continues to brighten my life with her humor, creativity, and forcefulness.

What is your idea of perfect happiness?

A life filled with simultaneous silence in solitude and soul-lifting noise.  Living every moment with meaning, working to always better myself creatively and intellectually, and bringing happiness to others.

Which historical figure do you most identify with?

I feel like my answer to this question always changes, but I am going to have to say Frederick Douglass because I cannot think of anything more bad-ass than teaching yourself to read, escaping slavery, writing a book, and starting an abolitionist movement.  I admire his cleverness, mental strength, creativity, and passion to fight the system.

What is the trait you most loathe in yourself?

I can be pretty slothful sometimes, and I hate it.  I also have a big appetite, which causes problems, but if I loathed this I would be so heavy with self-hate to operate.

What is the trait you most loathe in others?

Lack of respect for other people.  Treat others how you’d like to be treated, and we’d have a lot less problems in the world.

What do you enjoy most about WIU?

The people are great!  So welcoming and fun to be around.  I also love the passion of the professors and the fascinating reading lists.

Describe Macomb in one word?

Crumbling.  All the buildings seem to be in a state of decay, like a once-great castle slowly receding to dust.  It’s actually comforting to me because it reminds me a lot of my hometown, Enfield, CT. Macomb has a lot of character, and I love the art scene and frequent events on the town green.  It’s nice to see flowers growing up through the shattered bricks and cracked concrete.

What is your dream occupation?

A writer and professor of English and Creative Writing.  I would love to teach during the year and write, travel, and tour various writer retreats/workshops over summer breaks.

What or who is the greatest love of your life?

Money.  Just kidding.  My family and creative drive are simultaneous greatest loves of mine.

The ability to breathe underwater so I can dive deep into the ocean or underwater caves and explore.

What do you consider your greatest achievement?

Writing a story titled Kineo about my dad and spreading my grandfather’s ashes in Maine.  It won the CT Young Writers Contest in 2010.  I have not since been able to write a story that has made grown mountain men cry.

What is your motto?

Ever since taking Jim VanValen’s beginning acting class at Cornell College, I have adopted the motto: Every moment has a meaning all its own.  It has helped me to react to every experience, good or bad, truthfully and without shame.

What is your current state of mind?

Nearly neurotic.  I have recently been pummeled with so many creative ideas for writing pieces that I do not have the time to preserve on paper.  I feel great stories slipping through my fingers like shiners in a stream.

If you were to die and come back as a person or thing, what do you think it would be?

A bear because that is my spirit animal.  Long story.

If you could choose what to come back as, what would it be?

A shark or an orca.  I would love to tour the seas with little to no worry of being eaten by other fish.

If I don’t die from a heart attack as result of my insane daily caffeine intake and wild, irritated demeanor, I would like to grow old until I am nearly unable to function, and then I would buy a boat and sail out into the sea like Robert Redford in the film All is Lost, and die battling the waves of a hurricane.