EA Games: The Reality of Getting a Dream Internship

It was September of last year that I was suffering a self-imposed crisis. I had suddenly decided that I was in desperate need of an internship for the summer if I had any hope of being gainfully employed after graduation. I spent hours frantically filling out applications for every type of internship imaginable. Paid, unpaid, virtual, abroad. I did not discriminate; it seemed like everywhere I was qualified to intern at received my resume. One night while searching for more internships, I stumbled across a listing for a paid internship at EA Games. I laughed at my odds, but figured it was worth a shot. I sent in everything required and felt confident that my resume would go unread amidst a pile of several hundred applications. Months went by, I had not heard back from them. Truth be told, I didn’t think much about the application after a couple of weeks, I took their silence as a sign that I was not meant to work for the company. I laughed at myself for even applying, what would a video game publishing company want from an English major?

Two days into winter break, I woke from a luxurious night’s rest to an 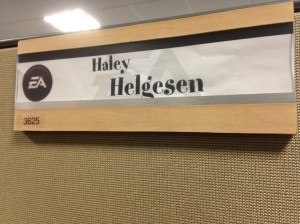 email from EA. The message was brief: “we looked over your application and would like to speak to you further. Please call us at your earliest convenience.” I had to scoop my jaw off of the floor and scream into my pillow before I felt composed enough to call them back. Five interviews later, I received a phone call offering me the paid twelve-week internship.

EA took care of everything for me, provided me with the resources necessary to uproot my life for a summer in Orlando, and begin a challenging internship-turn-career with their company. Due to weird Orlando rental laws, I ended up living in a hotel for the entire summer (the experience merits its own separate article), but I spent a majority of the time on EA’s campus. I was placed at Tiburon Studios, which is the studio primarily focused on the Madden franchise. The campus itself was what you would expect from a tropical paradise: flowers, wildlife, and massive fountains abound. While it was a stunning campus, it was also Florida in the summer, so you couldn’t really be outside for more than 20 minutes without exceeding heat index warnings for heat stroke.

This is probably where I should mention that working at a video game company is awesome. We had arcade units on every floor, free Starbucks coffee, video game memorabilia, a lax dress code, and conference rooms that were just giant ball pits. Much like the other technology companies, EA took pride in having a corporate culture that matched the creative pursuits they pioneered. This meant frequent game tournaments, free games, and red carpet launch parties when new games released. We also had a guy who would come in every Wednesday and make fresh cookies to hand out to employees (that was my favorite perk).

I wish I could say that I was just allowed to play the whole summer, but the truth is I was so busy working that I didn’t take advantage of everything available to me. As an intern with EA Games, I was actually employed by EA academy, which was a wholly different entity to my department. I had specific assignments, networking requirements, and projects just for academy that differed from my job. So not only was I responsible for my writing work, but also all of my intern academy work. My professional position was producing technical writing projects in the corporate team, but as a part of my intern academy duties, I would also assist in dialogue and narrative writing in studio. It was strange to be torn between two different worlds, but being in EA, where it really is an environment where science meets art, it wasn’t as difficult or tedious as it sounds. It really was fascinating.

I could detail every challenge or success I had while at EA, but that

would be boring. So instead, I am going to name the three most important things I learned while there.

Sometimes I feel detached from the experience, like it didn’t happen to me. I guess I am still in a state of shock that I was selected, moved to Florida, worked in a studio, was flown to other EA locations, got five recommendations for hire, and am now back in Macomb. All of the successes, failures, memories, and traumas still have yet to truly seep in. Overall, I consider the experience a triumph. I learned and experienced so much in such a short amount of time, I am not sure how I will replicate such a process in the future. From here, I don’t know what happens, maybe I will end up working for EA, and maybe I won’t. But the experience will stay with me and I will carry it to whatever career I decide for myself. In the end, I couldn’t ask for a better internship experience, and I am forever grateful to the talent recruits at the EA Intern Academy who looked at my shoddy resume and said we should give this girl a call.