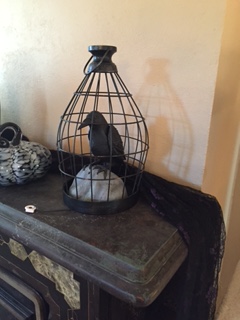 There are two things in this world that can send me hurtling back into my emo teenage years: My Chemical Romance and Edgar Allan Poe. Suffice it to say, upon walking into the Helwig residence for Dinner and Conversation night, I was humming the melody to the song “Helena” while serving myself a healthy portion (or two) of mostaccioli. The entire residence was decked out with Poe-themed trimmings, from the ravens tucked in every corner to the lemon-frosted Poe cookies in the entryway, and I felt transported back to the “misunderstood” age of yore upon entering the dining room.

“Dinner and Conversation” is an event held by Sigma Tau Delta that I had heard much of from my Writing Center coworkers over the years. Previously, it was held at The Old Bailey House, but this year the Helwigs decided to hold the event at their morgue-turned-home as they felt the setting was more appropriate for Poe’s dark nature. The event is exactly what it sounds like—a bunch of Sigma Tau Delta members chit-chating over homemade goodies about a particular topic or author. This year’s topic was Poe—a fan favorite amongst former angsty teens, like myself.

After settling in and eating far more Poe-face cookies then what was socially acceptable, I filed into the kitchen with the others to serve myself some pasta and warm thyme-spiced bread. To my relief, there were both meat and vegetarian options for the mostaccioli. After everyone was served, we all found seating in the dining room to eat our loads of carbs as Dr. Tim Helwig called us all to attention.

Briefly, he explained a biography of Poe’s life, along with a few short anecdotes of his experience with reading and learning about Edgar Allan Poe. Following this, Dr. Helwig encouraged the other attendees to share their stories about their encounters with the works of Poe. While going around the room, the pattern of “I first read ‘The Telltale Heart’ in middle school” began to emerge, which showed not only the popularity of Poe, but also the odd fascination with that particular work. I admitted that de

spite drooling over “Annabel Lee” in my high school years, my favorite work was “The Black Cat,” which I did not read until college. It was interesting to learn about everyone’s favorite Poe works, as well as the varying opinions around the room. In fact, I was surprised to learn that not everyone who attended was a Poe fanatic, but rather a fan of free food and engaging in intellectual conversation.

In short, my first Dinner and Conversations was overall an interesting experience. I recommend that any new member of Sigma Tau Delta attend, even if they are not familiar with the chosen topic. Not only is the free food fantastic, but the company is even better.