I’m sitting in a cafe in Wisconsin munching on an apple cider donut. It’s raining outside, and in my lap sits a pile of new and old books wrapped in crinkly paper. Across the table, my fiance takes a tentative sip of my lavender-caramel macchiato (which he states was “surprisingly decent”). The rain trickles down the window beside me, and I watch as the raindrops race each other to the bottom of the pane. Between the smell of brewing hot chocolate, and the sounds of hipster instrumentals peeking out from speakers hidden around the room, I find myself falling into a sort of happy lull. 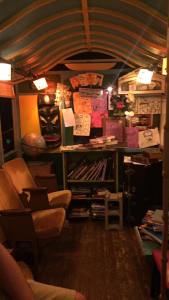 The hidden sitting area for a cafe in the City Museum, St. Louis. My order was a small cup of homemade soda and a bar of dark coffee-chocolate.

I reach into the brown paper bag, pull out my newest purchase, and flip open to the first page. I’ve never heard of this book before, but the premise sounded promising, and the cover captured me upon first glance. It features muted green and turquoise streets surrounded by a string of fairy lights with the words “Midnight at the Electric” splayed across the front in white cursive. I settle into the story with a final sip of my macchiato. With the taste of lavender on my tongue, I find myself transported twice. Once, from Macomb, Illinois to Baraboo, Wisconsin, for a family camping trip; then twice, into the world of the page. 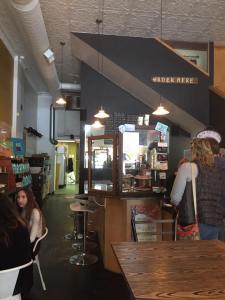 Baraboo, Wisconsin where my order was lavender-caramel decaf macchiato and an apple cider donut.

I believe that these types of moments capture an aesthetic that most English majors (and bookish people in general) can appreciate. C.S. Lewis even famously said “You can never get a cup of tea large enough or a book long enough to suit me.” Taking it a step further, I believe the combination of coffee shops, bookstores, and new places become a sort of perfect trio for the bookish person. I find myself longing to find these places as I travel, as they have become my sanctuary. This may seem obvious to some, but for me personally, this combination of the simple pleasures in life had meant nothing more than a cute Instagram picture before the year 2017.

This year, I have done more traveling than ever. I’m a college student, so these trips were rustically cheap, but I still managed to find my way into weird little coffee shops and bookstores no matter where I went. In Louisville, my colleagues and I found a newly opened coffee shop/bookstore/ art exhibit that was ethereal and strange, with odd found-art pieces hiding between shelves of classics. During my spring break road trip to Florida, I stopped at a Starbucks right past the state line, and I sat near the window marveling at the palm trees while sipping my first iced drink of the season. After I got engaged in St. Louis, I still distinctly remember lounging on an oversized chair, eyeing the shiny new ring on my finger as I turned the pages of “Anna and the French Kiss.” 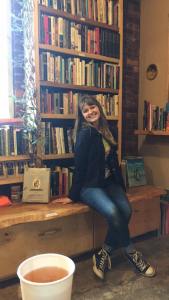 Louisville, Kentucky where my order was a cup of green tea and a scoop of vegan chocolate ice cream.

As I enter my senior year of college at WIU, I am beginning to plan where I may physically travel next. Yet, I have found that I have already done a lot of traveling mentally over the years. I have spent time nestled in the pages of Arthurian legends, American Gothic, and Shakespearean dramas. I have traversed the poetic images of Slyvia Plath the same way some have viewed the Grand Canyon. Instead of tour guides, I’ve had the voices of immigrants lead me through their struggles in the United States and have listened to the exclamations of artists breaking the frontier of Internet hypertext. My classes have primarily occurred on the first floor of Simpkins; yet, they have also moved beyond those walls to places I never would have imagined I would visit during my four years at Western.

Now, as I move forward, I will have to find those spaces elsewhere. I know that those places will not be the same as WIU, and that this school will forever hold a special spot in my heart, but as time goes on, I find that my need to physically travel has grown along with my ability to travel through text. I don’t know very much of the destinations I plan to travel to, but I do know one thing: they serve cold brew. 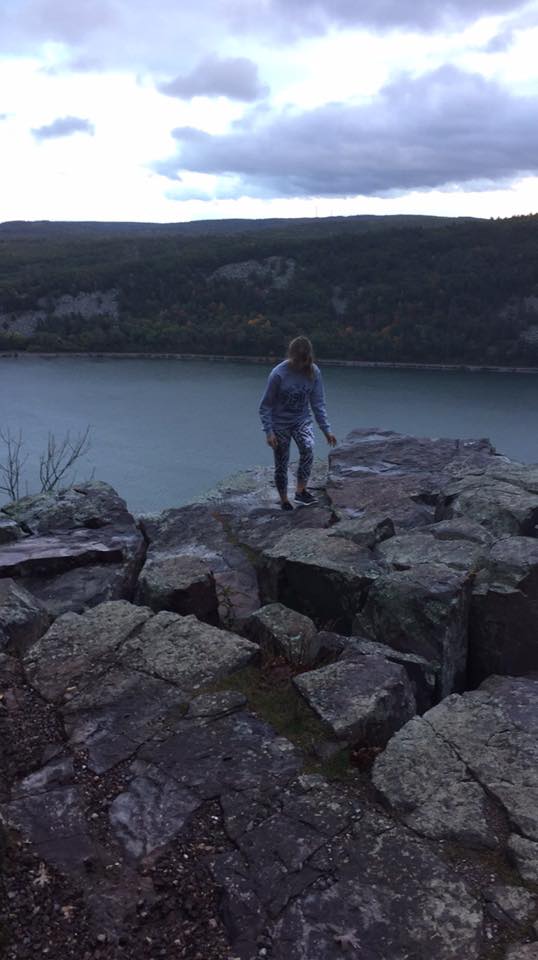 Not quite an Instagram model, this is little old me hiking in Wisconsin once the rain let up.

← The Best Places to Sleep in Simpkins (Meet the Editors Part 1)
English Majors are Zombies!? →